And off we go into winter… The rains are supposed to arrive tonight, and carry on until Tuesday, ending the wonderful indian summer we have been having. I was very thankful to have the earlier rains, as they gave us a chance to see what needed to be done before the season begins in earnest. I expect to be out with a pick and shovel on Saturday trenching out the drive way to prevent a recurrence of the river-runs-through-it episode we encountered a few weeks ago.

Summer was good, we got a lot done at the ranch, definitely more than the cabin, but I still managed to get the second floor supported, sub floor laid, some windows installed, and of course, the immense leveling and clearing that led to the wedding back in August.

I expect a lot of work to get done with the coming rains as ranch work generally slows down this time of year. We’ll be placing the final support beam Sunday, and from there, I get to work on pulling in walls, finishing the window installations, and from there, it should be a short matter of drywall and flooring before I get to start working on the artistic side of cabin building.

Bring on the rain! 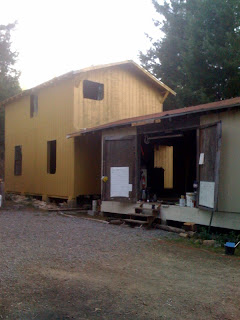 Painted the cabin with 17 gallons of recycled paint over the last few days. Should reduce weather damage this winter. Rains to start tomorrow and snow coming soon, so we spent yesterday getting things covered, and indoors when needed. We should be lifting the new gable beam into place on Sunday, and I will be picking up an entire kitchen’s worth of cabinets, countertops and fixtures early next week. 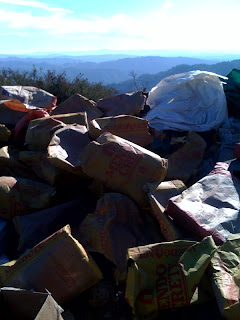 The mountain of empty concrete sacks on top of the mountain. New word is that the Mariah turbine will be on the truck in the first week of November. Weather permitting, we might have this beast up by Christmas.

A concrete burn and a sense of acomplishment. 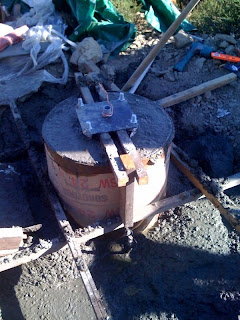 This is 5000 pounds of post-crete. I carried it up the hill, I mixed
it, I made this… Now I go take a shower… Somebody relax for me!

All in a years work! 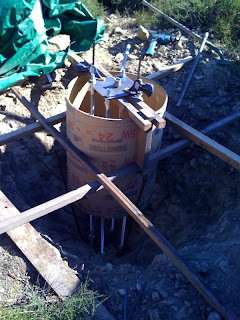 We finally got the foundation kit for the Mariah wind turbine, only
about 9 months after I jackhammered this damnable hole on the top of
the rock.

Looks like we’ll be pouring Crete tomorrow, though the boss and I have
a bet on when we’ll actually get the whirly bits.

We had a touch of rain last week 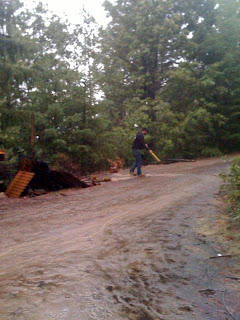 It was our first heavy rain since moving up here, and since doing an
amazing amount of clearing and leveling… Little did we know that we
had conspired with nature to create a river running to a small lake
beneath the camper. I now know that you cannot simply fill in a pond.
You can however invent mud golf with a pollaski and a tempest.