This bastard ate another post. This is like being crippled. Here’s another ducking picture… I hate auto correct.

Stupid blogpress! Spend tons of time writing a blog on this stupid little on-screen keyboard, and it gets eaten on upload. Let’s try this again:

We finally got our first raised beds in! Just a simple winter start of garlic and onions, but we are excited! The soil is a mix of peat moss, horse poop and the native “soil”; alternately clay and soft sandstone. Smells rich, now let’s just hope this is the last of our Indian summers, and we don’t wind up with young shoots too early.

We also took the time to try an experiment with blackberry cultivation. Apparently, burying the tips of the plants at the onset of winter will encourage them to root. Come spring, you snip the arches in half, and you’ve got new blackberry starts to transplant.

The solar panels have also been transplanted qto the garden, giving us a substantial increase in power as the sun dips deeper and deeper into the southern horizon. I’ll likely be running the last twenty feet of romax for lighting fixtures this evening.

This blogpress program is buggy as hell, and will not scroll down enough for me to see what I am typing, so I’ll write more later.

The powerhouse! A tour of the solar system!

Testing out a new blogging app on the phone that allows multiple pictures, and hopefully will not turn my text into haikus. Let’s see how it works!

So, here is our power system. Also known as “the contraption that turns much gasoline into little electricity”. Since we use almost no electrical devices, it is basically a ridiculously innefficient money sink… Why?

Because we can’t let these guys go below 50%…

That’s our 24v battery system, which I believe are already ruined, and which were costing me $70 a week in gas when it was 4.50 a gallon. It’s gotten better by reprogramming the charge controler, but when the revolution comes, they’ll be thefirst against the wall.

All this; Despite our beautiful panels. We’re pulling in 1-1.4 kw hours a day during the summer with these little guys, but in our current winter days, they are simply fun to look at. We could use more panels when the sun comes back next spring, but I bet with better batteries, these two would meet all our needs.

Which is where this little guy comes in. It’s a little 3.5kw generator from harbor freight. We’ve got a larger 5kw Honda we use when pumping water, but it uses way more gas, so we only use it to charge the batteries when pumping water. This one runs about 90 minutes on a gallon of gas providing 18 amps to these:

…The brains behind the operation; overkill for the moment, but as we add other electrical generators, be it solar, wind, or orgone, it will accomodate.

All-in-all, kerosine lanterns and a pocket battery charger would probably suit our needs at the moment, but if we shut down the system now, our batteries die; lesson learned; the big solar system should go in last. . .

The beam is up! 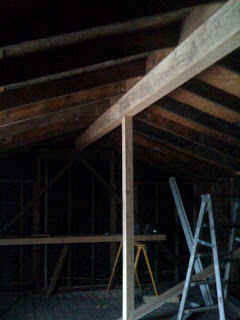 …And with it, the last task I am left unable to complete alone is
the ceiling drywall upstairs. I may be crazy, but I still expect to be
in the cabin by christmas, provided we accquire a woodstove in time.