Windmills suck. Or at least the project at hand has proven to suck. We are currently guinea pigs for a new VWAT design, and have been forced to rengineer every step of the way. Mis-shipped nuts, an outdated manual and an installer who dropped out before he ever dropped in have left us with an amazing erector set. I’m now off to replace every airfoil nut using a hand crafted tool, some pipe clamps and a bit of cursing.

The cabin is 99% wired, and I’m into the crafty stuff now, a single switch in the bedroom that turns on emergency lights, which will also turn on if the power goes out. Spot lights over the windows, DP switches, etc. Scored some cool fixtures on last weekends trip to the city.

We have also started insulating the cabin where ever possible. This morning, looking back at the cabin, I noticed a stange pattern of dew on the roof. It was still damp where the insulation was, meaning that less heat is escaping. The cabin is already begining to feel warmer.

Sorry for dropping out for so long. WordPress for the iPhone is crap, and eats about 80% of the blogs I write on it, so I will be returning to one picture per post when blogging from the iphone.

What you have missed: 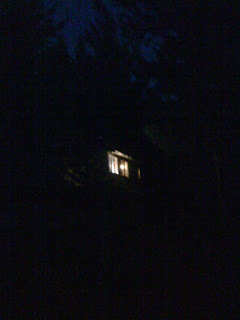 We now have six windows in the cabin, at $15 a piece from the local window and glass shop’s bone yard, they were recycled, cheap AND double paned. The only thing more beautiful than the view from our kitchen windows are the friends who helped hang them. 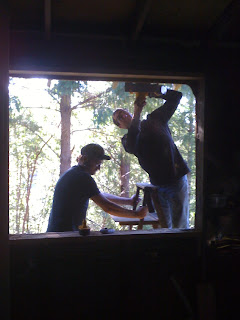 Much love to E&Z, who have helped shed a little light in my life, more times than they might ever realize. 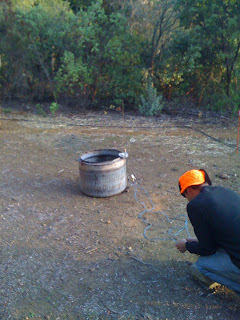 Did I mention E loves rockets…
So, a few weeks back, a mountain lion killed our neighbors dog, and has the entire hill on edge. The same kitty was also seen stalking another neighbors dogs, while they played with their kids. Since the first snow, though, when we saw some tracks out by the edge of our property line, we haven’t seen the slightest trace, though the bobcats currently seems to be suffering from some sort of exhibitionism.